Developing the Economy of UP 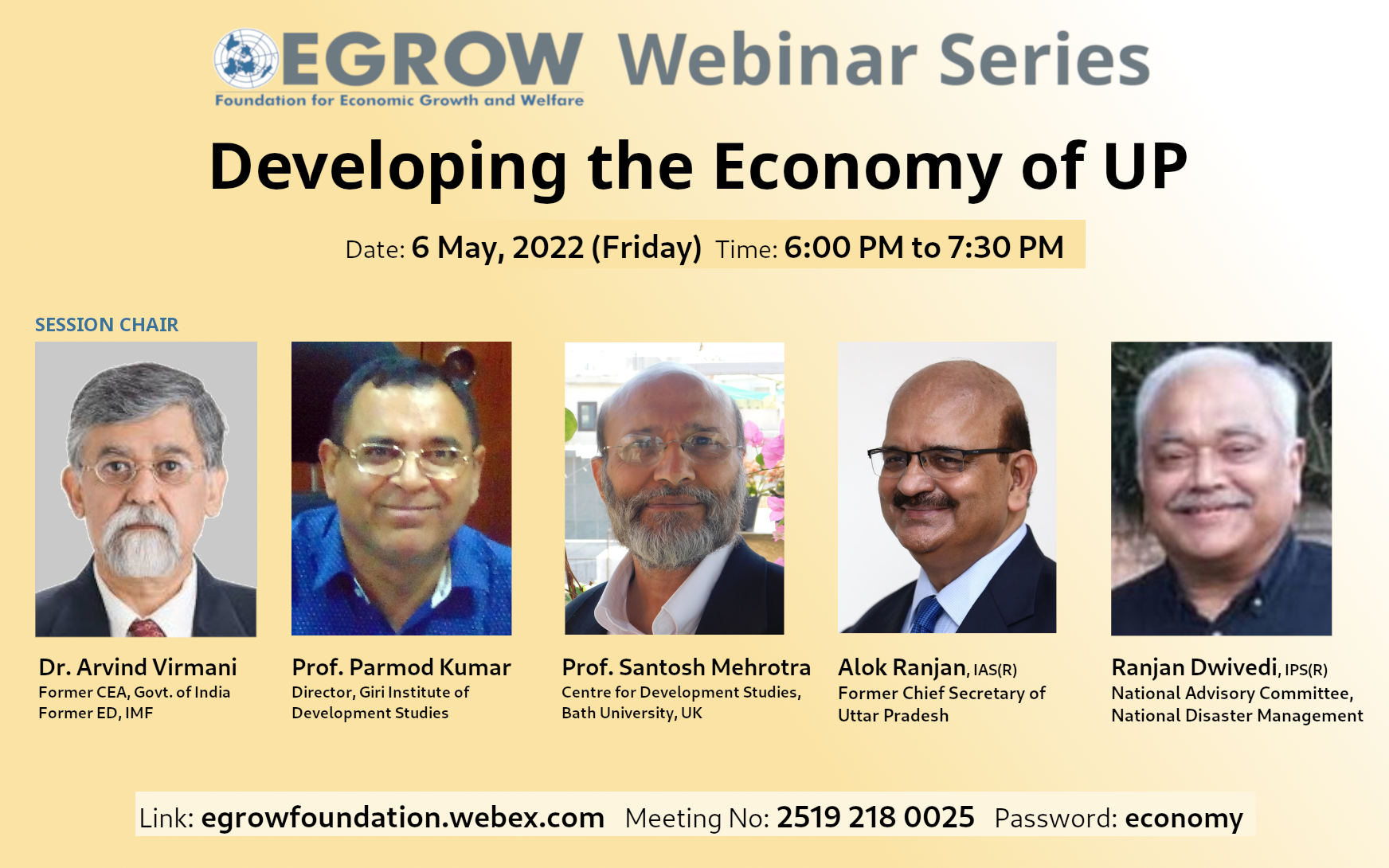 The economy of Uttar Pradesh is the third largest of all the states of India. According to a report published by the Ministry of Statistics and Programme Implementation, Government of India the nominal GDP of the state for the year 2020-21 is ₹17.05 trillion (US$220 billion). The Gross State Domestic Product (GSDP) of Uttar Pradesh grew at a CAGR of around 8.43% between 2015-16 and 2020-21 to reach Rs. 17.06 trillion (US$ 234.96 billion). The Net State Domestic Product (NSDP) grew at a CAGR of around 8.42% between 2015-16 and 2020-21 to reach Rs. 15.12 trillion (US$ 208.34 billion).Uttar Pradesh has made considerable progress in reducing its poverty in the period between 2004-05 and 2011-12. This has been mainly driven by a remarkable reduction of over 25.4 percentage points in rural poverty in the state, bringing its level around the national average of rural India in 2011-12. The pace of poverty reduction in urban areas of the state has been less impressive as it reduced only by about 5 percentage points from 42 per cent in 2004-05 to 37.2 per cent in 2011-12. While the rural poverty ratio of the state is almost similar to the national average, the urban poverty ratio in Uttar Pradesh is more than double than that of India. In 2011-12 Uttar Pradesh is among the few states which have a substantively higher proportion of urban poverty (37.2 per cent) than that exists in rural areas (29 per cent).According to the monthly data of the CMIE, the unemployment rate in Uttar Pradesh has reduced to 2.9 per cent in April 2022, from 4.4 per cent in March 2022. Notably, the Uttar Pradesh government, in its previous rule between 2017 and 2022, had set a record of providing over five lakh government jobs to the youth of the state.

The speakers will critically examine the UP model of Development and its implications on the state for future.

Arvind Virmani is Chairman of the Foundation for Economic Growth and Welfare (EGROW) and President of the Forum For Strategic Initiatives (FSI, Delhi). He has been a Mentor (economic policy) to FICCI & a member of RBI Technical Advisory Committee on Monetary policy

He was earlier Executive Director, IMF and Chief Economic Advisor, Ministry of Finance and Principal Advisor, Planning Commission. During his tenure he advised on a host of economic policy reforms, through 100s of policy papers, notes and committees.

He has served as Member, Telecom Regulatory Authority of India (TRAI) and as Director & Chief executive of the Indian Council for Research on International Economic Relations (ICRIER).

He has published 35 journal articles and 20 book chapters and written over 50 other working papers in the areas of Macroeconomics, growth and finance, tax reform, International trade & Tariffs, International relations, and national security strategy.

Parmod Kumar is the current Director of Giri Institute of Development Studies. Previously he worked as In-charge Director and Professor, Agricultural Development and Rural Transformation Centre, Institute for Social and Economic Change (ISEC), Bengaluru, India. Before joining ISEC he worked at the National Council of Applied Economic Research, New Delhi, and the Institute of Economic Growth, Delhi. He obtained post-doctorate as Sir Ratan Tata Fellow and doctorate from Jawaharlal Nehru University, New Delhi. He was Fellow under the International Visitors Leadership Program sponsored by the US government. He has been visiting Scholar to Glasgow University, OECD-FAO Paris, Zurich University of Applied Sciences (ZHAW) and Sichuan Academy of Social Sciences, China. He has authored/co-authored more than twelve research volumes. His latest book titled, ‘Contract Farming and Land Tenancy in India: Prospects and Challenges’ published by sage. He has published around 70 research articles in refereed national and international journals. He has published articles in high impact journals. He was managing editor of the Journal for Social and Economic Development (JSED) and was on the editorial board of Agricultural Situation in India and presently he is an executive member of Indian Journal of Agricultural Marketing; and Indian Journal of Agricultural Economics and Member Editorial Board of Indian Journal on Social Justice. He was empaneled as Visiting Professor in Economics for deputation to ICCR Chair Abroad by the Indian Council for Cultural Relations (ICCR), New Delhi. He has been member of various committees of the Union and State governments. Currently, he is Chairing Working Group on crop husbandry, agricultural inputs, demand & supply projections constituted by the NITI Aayog. He was conferred the IDRC India Social Science Research Award for the work on public distribution system. He is guiding 10 PhD Research Scholars and has been on Doctoral Committee of a numerous PhD Research Scholars. His major area of research belongs to Agricultural Economics; Environment Economics; Rural Development and Development Economics.

Dr Santosh Mehrotra is currently Professor of Economics, Centre for Informal Sector and Labour Studies, Jawaharlal Nehru University. Prior to this, he was the Director General of Institute of Applied Manpower Research, New Delhi, the only research institute of the Planning Commission, Government of India. He was first Head of Rural Development Division, and then Head, Development Policy Division, Planning Commission, from 2006 to 2009. He was one of the authors of India’s 11th Five-Year Plan (2007–12) and of the 12th Plan, and also led the team on the India Human Development Report 2011.

Dr Mehrotra held a three-year appointment at the Centre for Development Studies, University of Bath, UK, as Parkin Visiting Professor (2010–13). He has worked with the United Nations Development Programme and UNICEF too. He is a human development economist, and his research interests have spanned industry and trade issues, the impact of macroeconomic policy on health and education, the informal sector, and the economics of health and education.

His latest books are: Seizing the Demographic Dividend: Polices to Achieve Inclusive Growth in India; India’s Skills Challenge: Reforming Vocational Education and Training; and Land Policies for Equity and Growth: Transforming the Agarian Structure in Uttar Pradesh. The current book is the third by Dr Mehrotra for SAGE publications.

Prof. Alok Ranjan is a retired I.A.S Officer with 38 years of distinguished service. He retired as the Chief Secretary of Uttar Pradesh (Executive head of the state) in 2016.

An established leader, with extensive experience of management and administration across Industries and sectors including education, economics, finance, agriculture, industrial governance, public policy and more. Some of the prominent positions held by him during service include Infrastructure and Industrial Commissioner U.P, Agriculture Production Commissioner U.P, Principal Secretary Urban Development & Technical Education, Vocational Education, Basic Education, Joint Secretary Defense (Govt. of India) and Secretary to the Chief Minister of U.P amongst many others.

Post retirement from I.A.S, he held the office of Chief Advisor to Chief Minister of U.P (Cabinet Minister Rank) and Chairman UPSIDC (Uttar Pradesh State Industrial Development Corporation), where he oversaw all development initiatives for the State of Uttar Pradesh. He is currently serving on the board of directors for Bennett Coleman University, as Honorary Advisor to the PHD Chamber of Commerce & Industry, as Chairman Indo-Latin Chamber of Commerce and multiple other organizations. He is also serving as Adjunct Professor for various leading universities.

Prof. Ranjan is an established thought leader and seasoned motivational speaker on Management, Leadership, Governance and Public Policy. He has also authored two books, and writes articles for leading national publications such as Times of India, Economic Times, Business Standard, HT and more.

Ranjan is a member of the National Advisory Committee of the National Disaster Management Authority and an Invited Member of the Governing Board of Institute of Medical Sciences, Banaras Hindu University. He is also Special Rapporteur North Zone, National Human Rights Commission, New Delhi.

He has held the position of Director General of Police for Government of Uttar Pradesh, providing leadership and oversight to personnel in law enforcement with a special focus on protection of human rights.

Earlier, Ranjan has been National Programme Officer with WHO India. As the focal point for e-Health, he has advised the government on e-Health issues and initiatives. He supported public health institutions and programmes for leveraging information and communication technologies (ICT) in health service delivery and access to research. He facilitated India’s first e-consortia for international medical journals with the RGUHS Bangalore. Parallelly, as Technical Advisor to UNAIDS India he has developed partnerships through social mobilization using e-networks. He also developed a web based knowledge base on HIV prevention, care and support.

In his earlier role, he has worked with WHO in Geneva in the Department of Resource Mobilization and has raised funds from international institutions, governments, private sector, and foundations globally for health initiatives across the world.

Ranjan has done his graduation from St Stephen’s College, Delhi and his post graduation in management from IIM Ahmedabad. He has done an advanced study program at Columbia University, New York specializing in public and non-profit management. He speaks Hindi, Urdu, English and French. His favorite pastime is cultural tourism.