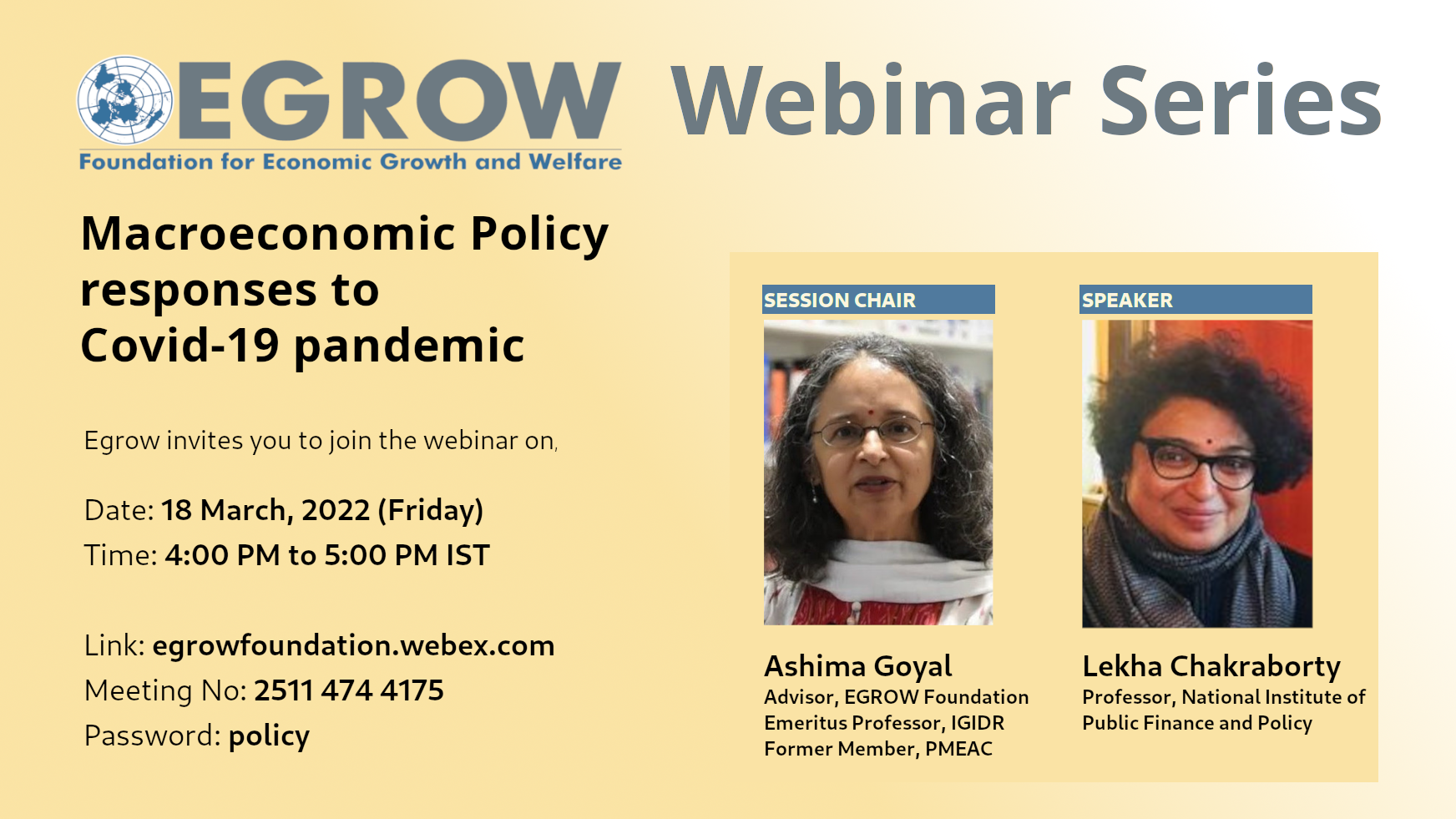 The macroeconomic uncertainty created by COVID-19 is hard to measure. The situation demands simultaneous policy intervention in terms of public health infrastructure and livelihood. Along with the global community, India too has announced its initial dose of fiscal and monetary policy responses. However, more fiscal–monetary policy coordination is required to scale up the policy response to the emerging crisis. Innovative sources of financing the deficit, including money financing of fiscal programmes need to be explored.

The presentation discusses the post pandemic fiscal and monetary hurdles faced by India and the types of responses available for overcoming these challenges.

Lekha S. Chakraborty is a Professor at NIPFP and elected Member of the Governing Board of Management, International Institute of Public Finance (IIPF) Munich -the world association of public finance economists.

She is a pioneer economist in institutionalising Gender Budgeting in India, with Chief Economic Advisor, Ministry of Finance, Govt of India in 2004. She is also research affiliate at the Levy Economics Institute of Bard College, New York. Her areas of interest are Macroeconomics of Public Finance, Fiscal Federalism, Extractive sector Economics, Financing Human Development and Gender Budgeting.

She is the recipient of Infoys best PhD thesis award from Indian Institute of Science (IISc) Bangalore.

She is co-author of the book "Social Sector in Decentralised Economy: India in the Era of Globalisation" published by Cambridge University Press.

She has worked for the IMF, World Bank, the UNESCAP, the UNDP, the UN Women, and the Commonwealth Secretariat on short stints. Her work experience on macro-fiscal policy and human development spans across 8 countries, Sweden, Canada, Morocco,The Philippiness, South Africa, Sri Lanka, Viet Nam and Mexico; and more frequently in Asia Pacific region.

She was twice, an awardee of Shastri Indo-Canada programme, from Department of Foreign Affairs and Trade (DFAIT), Government of Canada. She was visiting Professor at American University (Washington DC),Uppsala University (Sweden) , Carleton University (Canada), and University of Utah, US. She has papers in national and international journals.

She is a columnist in the Indian Express, The Hindu, Financial Express, Businessline, Business Standard , The Wire, Hindustan Times and Scroll; and featured in CNBC, ANI, DD News, AIR World Air Service and Rajya Sabha.