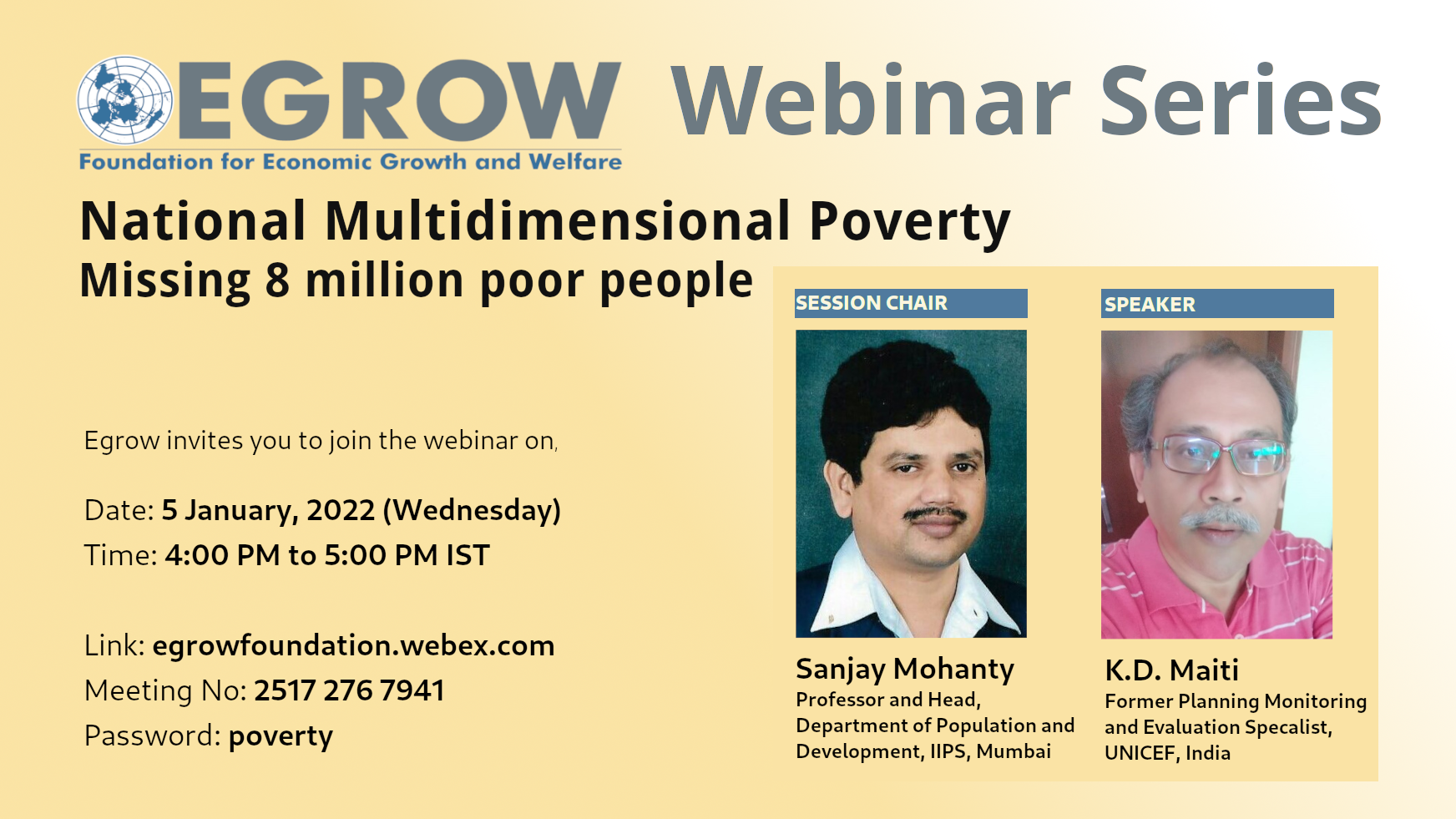 The global Sustainable Development Agenda demands that the signatories to the agenda measure proportion of men, women and children of all ages living in poverty in all its dimensions and ensure eradication of poverty by 2030 (SDG Target 1.2). The latest HDR Report, 2021 computes Multidimensional poverty index (MPI) as per the Alkire Forster (AF) methodology for 109 countries, on a uniform ‘global’ framework

According to global MPI, 2021, using the data from the National Family Heath Survey (NFHS), 2015/16, the incidence of multidimensional deprivation or commonly known as head count ratio (HCR) is 27.9 %; translating in absolute numbers, there are 370 million poor people, in the survey year (2016). Additionally, on an average, each poor person, is deprived on 43.9 % of the total weighted deprivation burden. To put it simply, this means, that, the ‘depth’ of deprivation is significantly high and therefore, the MPI or the ‘adjusted HCR, or the acute poverty level, is also very high. Overall, India’ s Multi-dimensional Poverty Index (MPI) points out that around 12 out of every 100 persons in the country are in acute poverty. Question is, which dimension of poverty framework is contributing more to country’s overall poverty?

After a decade or so, Govt. has published the National MPI (NMPI)[1], computed by the NITI Aayog guided by Oxford Poverty and Human Development Initiative (OPHI), based on the NFHS 2015/16 dataset, similar to that used in GMPI. The Report is definitely a good step in the direction of measuring Govt.’s social sector achievements, missing since 2011-12, when the then Planning commission estimated the overall level of poverty in terms of incidence of poverty (HCR) based on a NSS’s consumption expenditure survey conducted in 2011-12. It may, however, be noted that HCR computed based on Alkire Forster (AF) method as used by NITI Aayog, is significantly different from that of the country’s erstwhile poverty estimation methodology of the Planning Commission. Thus, the NMPI estimates are not comparable with that from the Planning Commission’s 2011-12 estimate.

According to NMPI, incidence of poverty or HCR at national level is 25.01 %, atleast 2.5 percentage points lower than that of the global MPI (27.9%), which means, there were 323 million multidimensionally poor people living in the survey year (2016), based on 2016 population projection figure, published by the National Commission on Population, in 2019. If population projection figure of UNDESA is considered (as is done in GMPI), HCR for 2016 comes to 331 million. Thus, in one stoke, eight (8) million poor people are missing in the NITI Aayog’s compilation, though NMPI and GMPI uses the same dataset, NFHS 2015/16. In terms of depth of deprivation or poverty too, NMPI’ s estimate, is again lower, reducing the average burden of deprivation from 43.9 % in GMPI to 43.1% in NMPI. What is the magic?

Quite clearly, choice of indicators and modification of certain indicator in NMPI played a critical role in reducing incidence of poverty by 8 million. Even with the modified framework, depth of poverty still remains high, on an average. It is yet to assessed how the depth of poverty distributes over different social groups, by gender and by age. It is well researched that aggregate MPI, or even the erstwhile poverty estimates by the planning commission hid the true story of deprivation in certain pockets.

The NITI Aayog NMPI Report, 2021, completely misses on the SDG agenda, of leaving ‘no one behind’ , by missing to provide level of incidence of poverty by social groups, gender and also by different age groups. According GMPI, 2021 for India, the Scheduled Tribe group accounting for 9.4 percent of the population is the poorest, with 65 million of the 129 million people living in multidimensional poverty. As per a study conducted by UNICEF and Oxford Poverty and Human Development Initiative (OPHI) (unpublished), there were 152 million poor children in multiple deprivation, in the survey year (2016).

Finally, an aggregated value does little service to policy reforms and investments needed for social sectors, knowing the level of inequality. Focus need to be drawn two aspects. One, setting right NMPI framework to capture the true story of deprivation and two, bridge the missing information gap, in terms of disaggregated information. That is urgently needed by national and state Governments for uplifting the poor and deprived, already affected by the continuing pandemic disaster.

Sanjay Kumar Mohanty is a trained economist and demographer and working in the field of population, health and development. Currently, Dr Mohanty is working as Professor and Head, Department of Population and Development, International Institute for Population Sciences (IIPS), Mumbai, India. He has 16 year of teaching and research experience and guided several students for theirl maiden research work. Dr. Mohanty was C R Parekh Fellow, 2009-10 at Asia Research Centre, London School of Economics, and Visiting Scientist at Harvard School of Public Health during September 2014- August 2015. He has authored more than 60 research paper in international and national peer reviewed journal. His research interest includes economics of health and health care, maternal and child health, multidimensional poverty and exploring the complex relationship of poverty, inequality and health in India.

Mr. Maiti, formerly with UNICEF India for more than a decade. Provided strategic support in monitoring and evaluation and the overall strengthening of data systems for children. In UNICEF, led the joint partnership of UNICEF and Oxford Poverty and Human Development Initiative (OPHI) in multidimensional poverty estimation. Also led on Child development Index for the country. Earlier he served Govt. of India on various senior positions, in several Ministries.

He has been a student of Statistics and Demography from the University of Delhi.