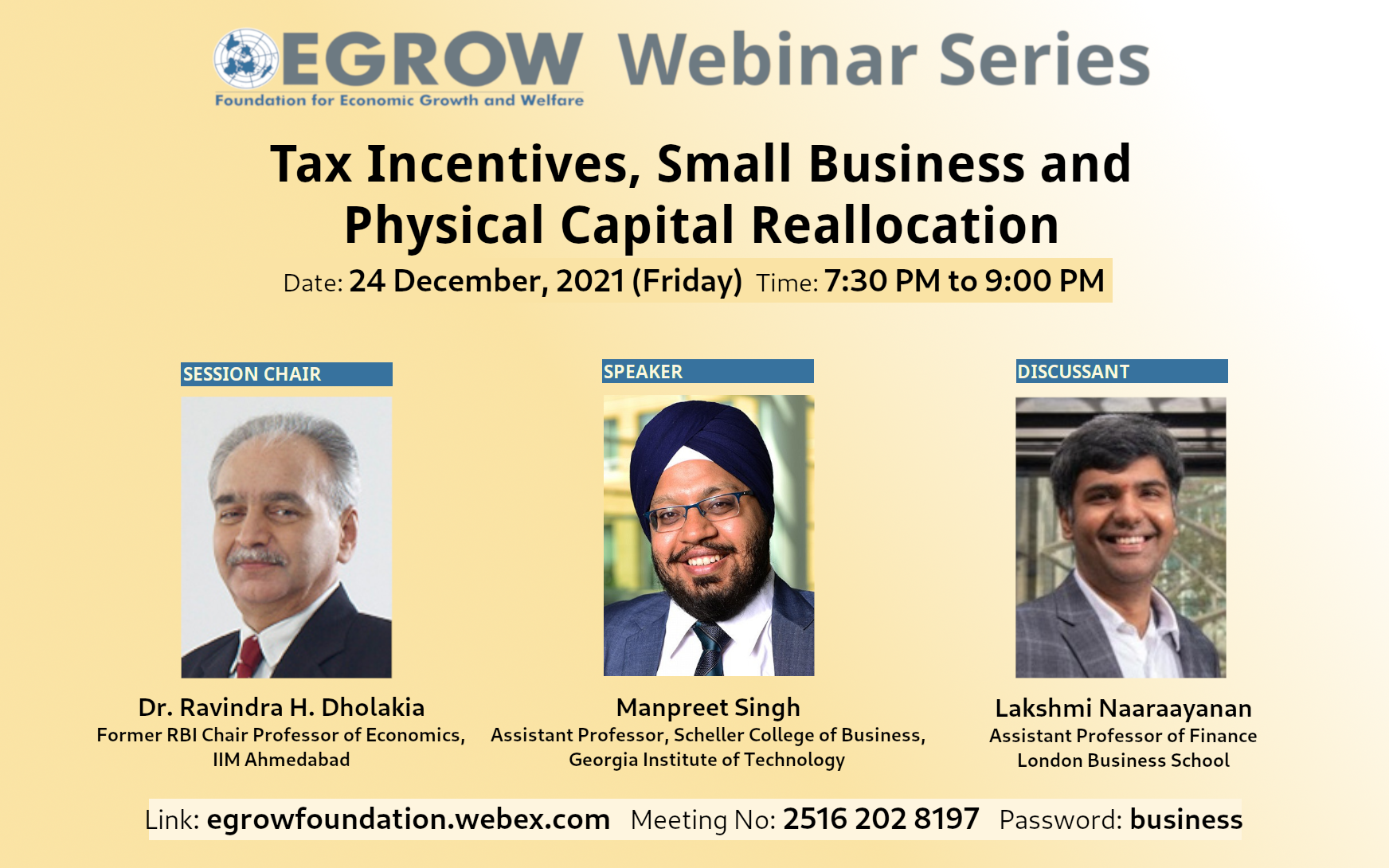 The presentation provide evidence on the capital reallocation effect of temporary federal tax incentives using data on a broad range of $298.6 billion worth of equipment purchases, spread over 3.32 million equipment transactions by 688,000 small businesses during 1998-2019. It is found that accelerated depreciation encourages the utilization of new capital goods. The tax subsidy on new equipment increases the supply of old equipment and lowers the old equipment's relative price. The reduced cost of old equipment thus eases the capital constraints for some small businesses and encourages business entry. Empirical results from the exercise highlights how investment in new capital goods motivated by tax incentives fosters reallocation of old capital goods to small businesses.

Professor Dholakia was the Economics Area faculty at IIM Ahmedabad from 1985 to April 2018 when he superannuated. He received the Most Distinguished Faculty Award for the year 2017-18 at IIMA. He has about 41 years of experience of teaching Economics to different groups like students, executives, policy makers and senior government officers. He was a regular visiting faculty to teach at the European Management Institute (ESCP-EAP), Paris from 2002 to 2005. He has collaborated on a series of research projects with the Earth Institute of Columbia University from 2004-05 to 2012-13. He has considerable practical experience working in high powered policy making and evaluation bodies in both the Central and State Governments in India. He was on the Monetary Policy Committee of India (2016-21). He was a member of the Sixth Central Pay Commission (2006-08) deciding revision of the pay and pension of more than 10 million employees in India. He was also a Member of the High Level Committees on Leveraging Postal Network in India (2014), HR Issues in the Merger of Air India and Indian Airlines (May 2011- Jan.2012), Public Expenditure Management (2009-10), and on Savings and Investment Estimation (2008-09) appointed by the Government of India; a Member of the Expert Committee on Restructuring of the State Public Sector Units (2004-08), the Public Debt Management Committee (2005-06), and the State Public Finance Reform Committee (1998 – 2000) appointed by the Government of Gujarat. He has recently chaired a Committee on Financial Sector Statistics (2016-18) and is currently chairing a Committee on Sub-National Accounts appointed by the Ministry of Statistics and Programme Implementation, Government of India (2018 onwards) and had chaired a Committee on Cost Saving and Resource Use Optimization in Air India, appointed by Ministry of Civil Aviation, Government of India (2013).

Dr. Manpreet Singh received his PhD in 2016 from the Hong Kong University of Science and Technology, Hong Kong. He holds a bachelor's degree and a master's degree with emphasis Economics from the University of Delhi. His teaching interests are in corporate finance. His research interest includes corporate finance, role of legal institutions and emerging markets. His research papers are forthcoming in top finance journals, Review of Financial Studies and Journal of Financial Economics. His coauthored paper studying impact of corporate income taxes on innovation was recently discussed by Austan Goolsbee (former Chairperson of the Council of Economic Advisers during President Barrack Obama's administration ) and Glenn Hubbard (former Chairperson of the Council of Economic Advisers during President George W Bush's Council) at NBER conference, and is set to be published in The Journal of Financial Economics.

Dr. Lakshmi Naaraayanan is an Assistant Professor, London Business of School. He is a PhD in Finance from the Hong Kong University of Science and Technology. Naaraayanan’s research interests lie in the area of empirical corporate finance – including corporate governance, entrepreneurship, financial intermediation, and law and finance. His research has won several awards including the USC Marshall School of Business Trefftzs Award at the Western Finance Association Meetings. His work has been featuring in numerous publications such as the Financial Express, Forbes, Oxford Business and Law, and the World Bank.

Lakshmi's research is featured in the Wheeler Institute for Business and Development brochure.