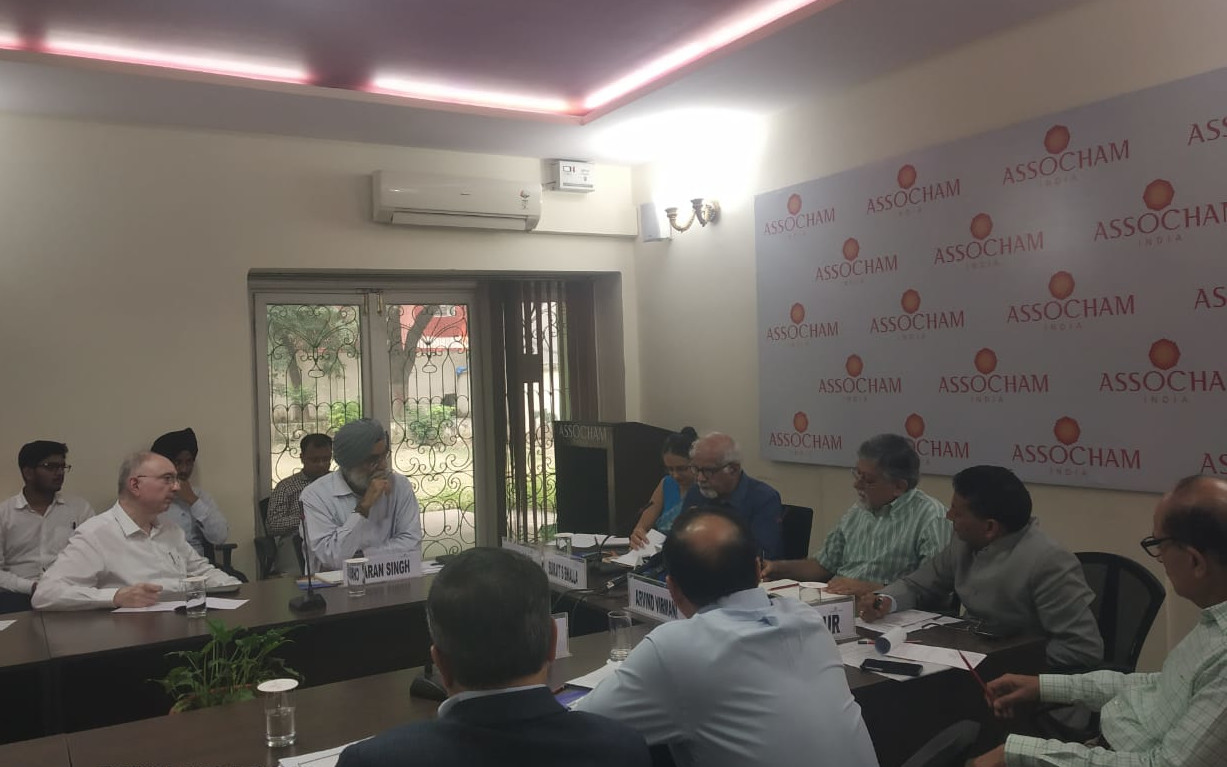 Key Take-aways from the discussion of the EGROW Shadow MPC on October 1, 2019 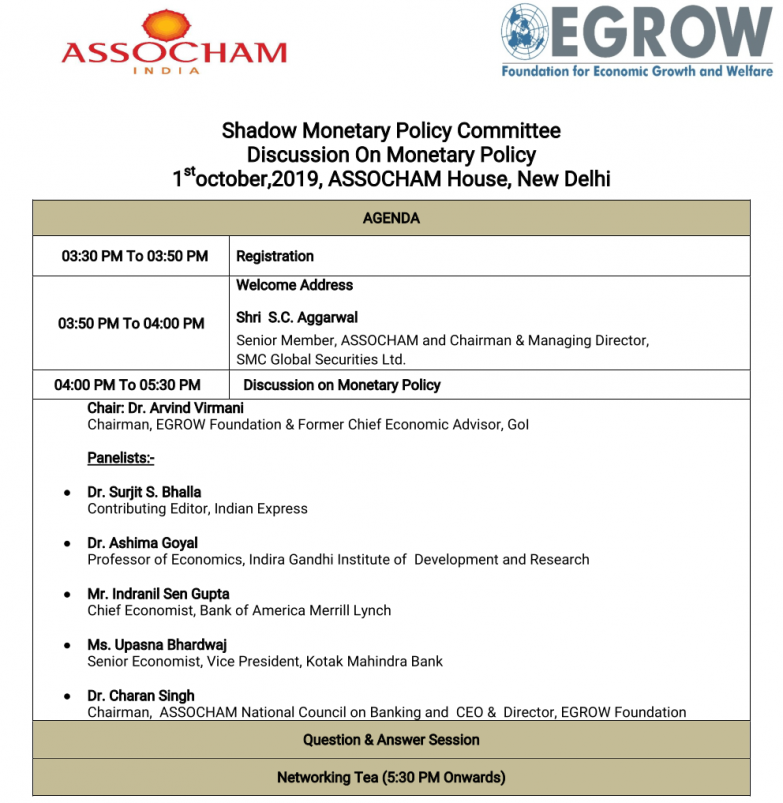 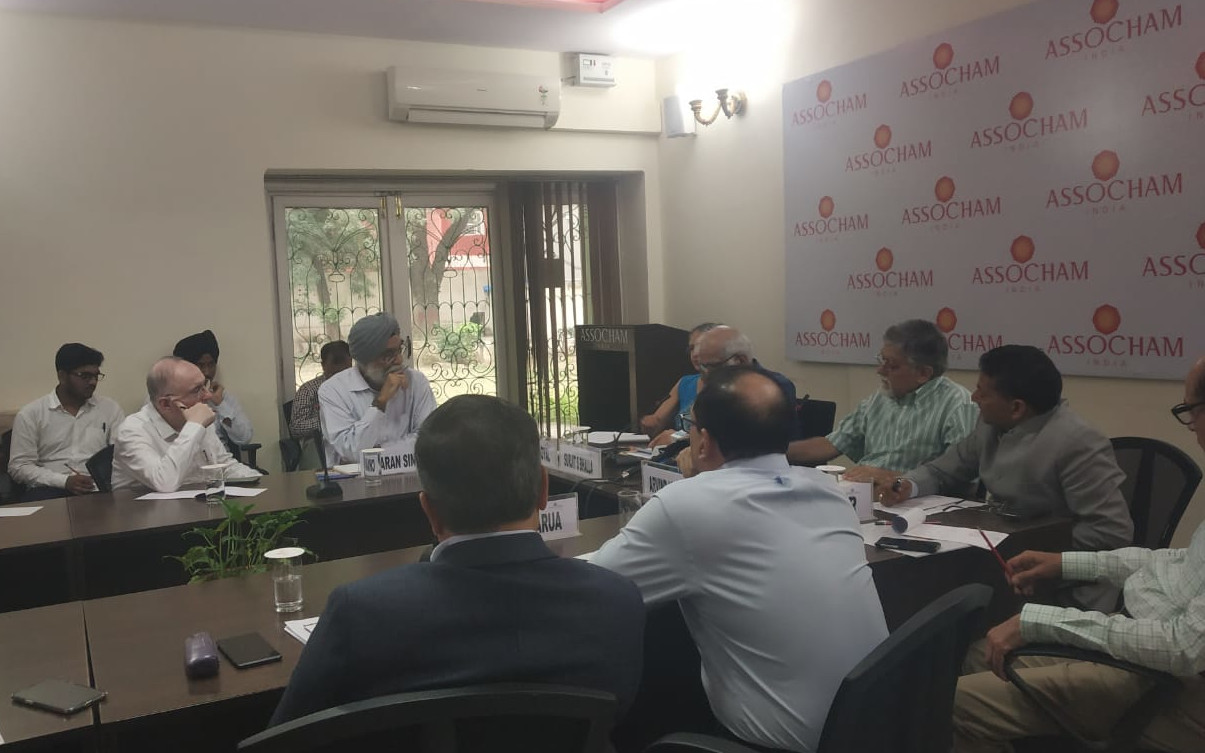 Recommendation of Members of the EGROW Shadow MPC

The global situation is worrisome, because of a decline in inflation due to the emergence of deflationary factors in the global economy and inflationary pressure is moderating across the globe.

GDP growth is significantly slowing in countries like China, US, Japan. This is probably happening due to slowdown in the manufacturing sector – in some countries gradually though. Thus, there is a slowdown in inflation and growth across the globe.

On the domestic front, growth forecast prediction for next quarter is around 5+/-0.5 percent and inflation is predicted by some experts to reach around 4 percent. Probably, 3 percent may be the right prediction for inflation.

The real GDP growth rate in the first quarter of 2019-20 is 5.0 percent and nominal GDP growth rate is 8.0 percent, which is the 6th lowest growth rate since quarterly data became available. From 1994-2019, interest rates on a global level have been around 2 percent per annum. Advanced countries struggle to maintain an inflation rate of more than 2 percent, and US also maintains an inflation rate close to 2 percent per annum. Oil price and inflation are always said to be linked, since in 1973 inflation closely followed the hike in oil prices. But what misses the eye is the major drought of 1972 which increased food inflation rates. In 1998 oil price was $10 per barrel, in 2007 it was $100 per barrel and reached a peak of $140 per barrel but even then there was a significant decline in world inflation.

We need to look into the relationship between gross fiscal deficit and inflation rate and, there exists no evidence of a positive correlation between both variables, not only in India but all over the world. This time we should experiment with 75 basis point rate cut since the Indian economy has slowed down, currently growing at 5.0 percent, but need more fiscal expansion. Since inflation is down, the RBI and the government should use this opportunity.

The slowdown is persisting in Q2 with few signs, if any, of a reversal. The RBI has identified it to be largely cycllical, but that implies a counter-cyclical macroeconomic stimulus must be given. As the government has limited fiscal space, and is focusing on supply-side measures, the onus is on the RBI, to change the real interest rate sufficiently to revive aggregate demand. Estimates of aggregate demand elasticity using the interest rate gap show it to be as high as in advanced economies.

Since the one year ahead nominal T-bill rate is 5.6, taking expected inflation at the target rate of 4, gives the real rate at 1.6. But the neutral real interest rate is that at which the output gap is closed and inflation is stable at target. Current conditions suggest the real rate is far above neutral.

Over stimulus can be prevented keeping the neutral rate as guide. While a 40 bps cut should be made now, future cuts can bring the real rate below 1, if the slowdown continues, while keeping it low positive.
Structural factors that kept Indian inflation high are relieved, so that inflation is unlikely to revert to mean—food and oil prices are likely to remain soft and household inflation expectations are better-anchored.

The financial frictions that reduced transmission have eased, as aggregate liquidity is in surplus, and sectoral liquidity provision has improved. To the extent risks are keeping market spreads high the Central Bank needs to compensate by lowering rates further.

Tax cuts are not expected to raise the fiscal deficit materially, while some counter-cyclicality is desirable. OMOs have successfully supported government borrowing and reduced G-Sec rates in the past.

The middle of a war is not the time to save ammunition for the next one. There is space available with the RBI and it must be used.

Inflation under control and likely to remain under 4 per cent. Despite geopolitical risks, the probability of a sustained rise in oil prices.low because of large reserves and tepid global demand. Both global deceleration and domestic slowdown remain key challenges. Escalation of domestic financial stress needs to be factored in. Recommend 40 to 50 bps repo rate cut and assurance of surplus liquidity.

The real GDP growth has declined but that is the phenomenon across the world. In advanced countries, like the US, Australia, and New Zealand, policy rates have been lowered in recent weeks. Inflation is low and production activity measured by IIP, as well as in 5 of 8 core industries is also low. Gold prices are projected to increase in the near future implying uncertainty in global markets, given the trade war between China and the US, and Brexit. External benchmarking has led to a reduction in lending rates by 20-25 bp, NPAs are in control and beginning to decline. Real Rep rate was 3.7 percent in February 2019 and 2.2 percent in August 2019. This is higher than expected. So, there is a clear case of reduction in Repo Rate by at least 100 bps. As RBI has to tread carefully, the reduction can be done in two instalments, with 50 bps on Oct 4, itself.

We expect the RBI MPC to follow Gov Das into another ‘out-of-the-box’ 35 bp cut on October 4 (and by 90 bp by December). This should help reduce lending rates at a time the 2018 liquidity crunch is still hurting growth. Second, the inflation outlook remains benign. Finally, while the growth benefits of the corporate tax cut will take 2-3 years to materialize, the immediate challenge will be to contain yields. It is for this reason we expect the RBI MPC to cut by 35 bp again, given that the global rate cycle itself is turning down on rising uncertainties.

The economic conditions have continued to deteriorate further with inflation remaining benign. Global conditions too remain benign which leaves room open for further monetary accommodation. We expect 40 bps of a rate cut in the upcoming policy meeting. While we do not expect a sharp revival in economic conditions in 2H, we believe that RBI may want to pause after the October cut to assess the impact of the previous rate cuts and the recently announced corporate tax cuts on the economy. The recent tax measures, offcourse, are positive for lifting the medium-term potential growth of the economy from boosting the export and manufacturing sectors and would help in creating employment opportunities addressing the structural challenges facing the economy. However, in the immediate near term, demand remains quite suppressed and hence we expect only a gradual economic recovery. This could create room for some further easing (up to 25 bps more) but only after a pause and will be data-dependent. Mostly we seem to be nearing the end of the rate-cutting cycle.

The Global market and domestic market is suffering from growth slowdown. The Government has initiated significant steps in recent weeks but interest rate reduction can help boost the economy.

Focusing on the revival of demand and to increase the economic growth rates, it is important to restructure the textile sector. There has been a declining trend in exports for textiles goods and a rise in costs in the manufacturing of textile goods. In India, this sector is growing, but a few issues need to be tackled to ensure stable growth (both domestic and global). Firstly, restructuring the GST framework will ease the functioning, since different raw materials are taxed at different rates. The second issue pertains to reforms in labour rigidities, as the garment industry is seasonal in nature, and an easy hire and fire policy will also assist in ensuring stable growth in the sector.

The credit flow to NBFC needs to be carefully interpreted because government NBFCs are large and get larger share of credit. On the other hand, non-government NBFCs, small in numbers, do not get enough credit.

There is a need to set up a refinancing institution for NBFCs like NHB is there for HFCs.

On-lending to NBFCs towards productive assets by banks be considered as priority sector lending (PSL). NBFCs should be permitted to issue PSL certificate on holding PSL assets. The co-originating and interest subvention (under MUDRA) should be extended to deposit-taking NBFCs as they have a better last mile connect with smaller business entities.

RBI’s rate action should be frontloaded and significant as the window of opportunity seems limited. Thereafter, the RBI can afford to stay on pause.