India’s Strategic Interests In the Context of Rafale Deal. 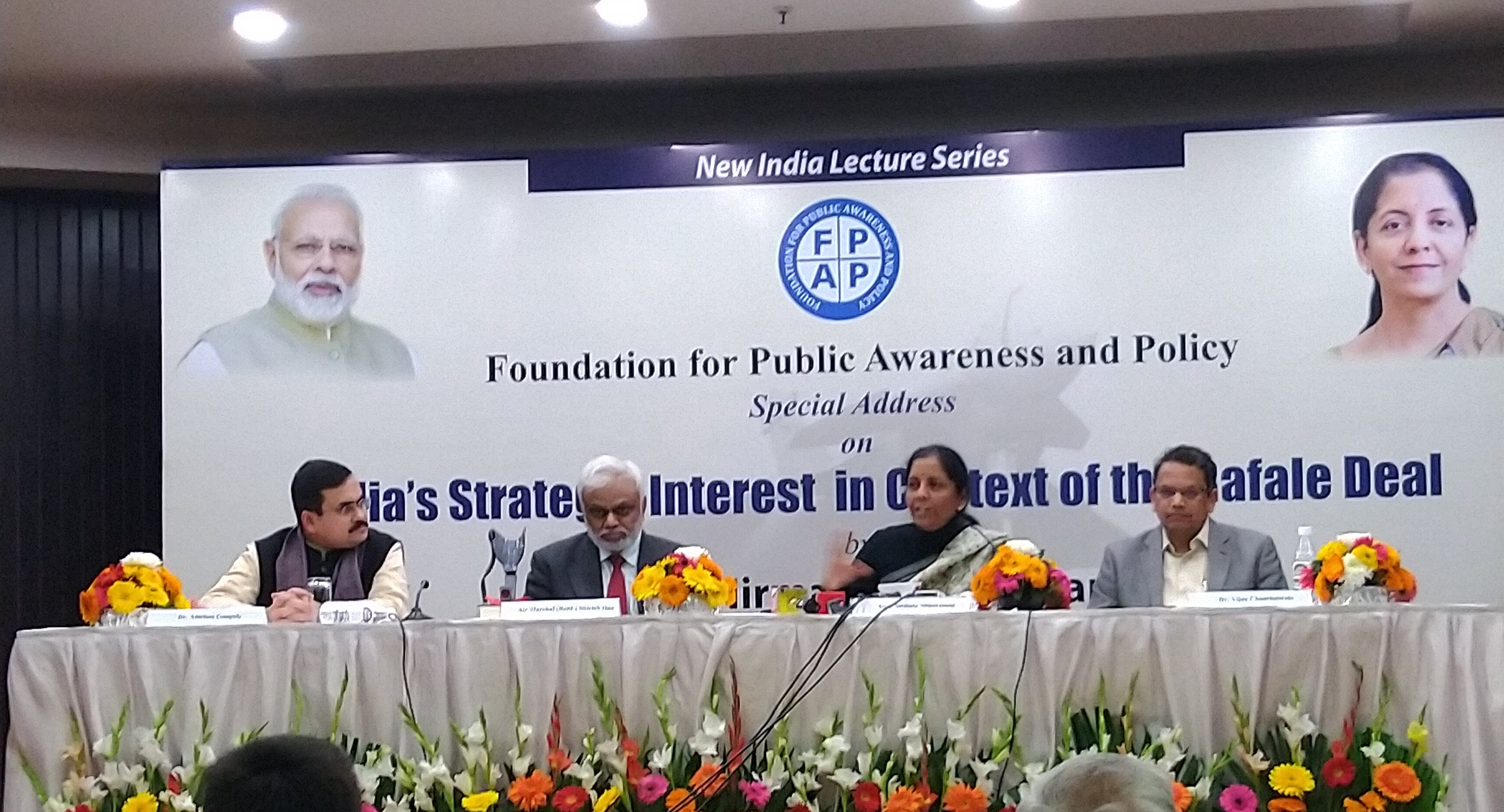 Dr Anirban Ganguly started the proceeding with a brief introduction of the topic and welcoming the guests.

The stage was then taken by the first speaker , Air Marshal Shirish Deo(retd) former Vice Chief of Air Staff. In a very passionate and emotional discourse he highlighted that at present Indian Air Force is holding only 31 operational Squadrons of fighter aircrafts , which are grossly inadequate for a two front war. In a very direct remark he pointed out, ‘if you are not strong, you will be provoked. It happened in 62 and it can happen again’. He further added , ‘We need to be strong and need to be strong quickly’. Air Marshal Deo thereafter highlighted that he has himself flown Rafale and pointed out that, “Rafale and S-400 are going to change the way we fight , the way the Army fights , the way Airforce fights or the Navy fights a war”. “A war with 31 Squadrons will give us heavy casualities” he added. The Air Marshal in his concluding remarks , stressed emphatically that ‘Rafale is a weapon’ and if the Airforce does not get it quickly Airforce will lose its edge too quickly.

After this talk the stage was taken by the honourable RM, who was very candid in saying that India has had debates on the defence procurements in the past and that it is perfectly fine to raise questions or seek clarifications. She pointed to the answer which she had given in the parliament some days back. She pointed out that the government is dutybound to give answers on the issue of transparency. She then went on to educate the audience that India is a vast country with terrains ranging from deserts, mountains ,high altitudes and jungles and each is characterised by different weather conditions ranging from high temperatures to heavy rains during monsoons to freezing temperatures and snow conditions. Any defence equipment which has to be purchased has to undergo trials in all such weather conditions before it can be cleared for purchase. Hence , the trial period generally goes upto a year and a half. She then added that there are two routes which can be followed for defence procurements, one, the tendering route and two, the inter-governmental route. She said the present government opted for the inter-governmental route and ensured that there were no middlemen involved. Hinting on the politicisation of the purchase she said, “Artificial storm is being created”. She further added that our borders are volatile as we have had four wars. Referring to the PIL on Rafale in the court, she said that it pointed on three things- The process , the price of aircraft and the Indian offset partner. Pointing directly to the opposition parties she said, “as a group opposition its your duty to inform the public but don’t confuse them”. She also said that it seems that the debate is moving towards stopping this purchase, which infact will be a disservice to the nation’s strategic interests. Referring them as cynics among the critics who are asking why are we are buying 36 now and 114 later she said we are at least concluding the deal which was lying without any action all these years. Towards the end of her lecture the RM gave out in detail the nitty gritty of the ‘offset clause’. As per her , this clause lays down that 50% of the deal amount the OEM has to invest in India, which would be beneficial for us. After the talk the RM took about 5-6 questions from the audience and explained the stand of the government on the Rafale deal.

Comments- The talk by Air Marshal Deo brought to fore a dire need of the Air Force for having a frontline fighter jet to thwart the nefarious enemy designs in a two-front war scenario. He pointed to the already depleted number of fighter squadrons and urgent need of refurbishment. The talk by honourable RM was fiery and enthralling. She made the audience spellbound with her indepth knowledge about all aspects of the deal as well as the necessity of the aircrafts for Airforce. She cleared all the maze around the issue and nullified all the questions which are being asked in the media with logic and an air of finality. At the end of the session she confidently took the questions from the audience and answered them with poise.

Overall, the lecture on the much hyped issue around Rafale deal was extremely educative and a very good initiative by the FPAP. The presence of RM herself giving details about the deal and procedures adopted and to clarify all issues threadbare left no doubt in the minds of the audience that the government is moving on the right path and with transparency on this issue. It has been brought out clearly that the purchase of these frontline fighters are the need of the hour and very much in India’s strategic interests.