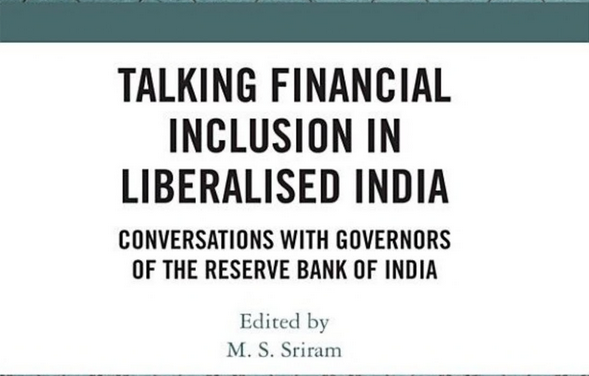 The book explores the changing landscape for financial inclusion over the years for reforms and liberalisation, and is a collection of interviews conducted by Prof. M S Sriram with Governors from the Reserve Bank of India (RBI) who held office from 1992 to 2018. The stated objective of attempting such a unique book, as given in the Preface, is that “While the archival material and policies would give a flavor of the official position on how the agenda of financial inclusion evolved, conversations with the people who were at the helm of policy making would give an indication into the thought process”.

The Introduction includes various highlights drawn from different interviews and mixed with Sriram’s own research on the subject. The author divides the journey of financial inclusion in four phases- co-operativisation; bank nationalisation; institutional tinkering; and providing framework for private sector participation. The discussion in the first phase is initiated from the All India Rural Credit Survey Committee Report in 1954 when important steps like nationalization of Imperial Bank of India and state partnership with cooperatives were initiated. In this phase,
effort was to save the poor people from clutches of the evil money lender. In the second phase, nationalisation of banks is discussed wherein the Union Government introduced social control over financial institutions, including banking. In the third phase, RRBs were introduced in many uncovered districts by commercial banks. In
the fourth phase, starting from 1991 liberalization in the financial sector begins and participation of private sector banks was encouraged. The branch licensing policy was liberalized and parameters like capital adequacy and prudential accounting norms were emphasized. To encourage outreach of financial services, Business Correspondents, and use of technology-based banking was introduced. However, despite nationalisation of banks, banking penetration continued to be low in rural areas and therefore, licensing policy had to be tweaked to ensure incremental branches in unbanked areas. There was a debate whether banks should be forced to enter into geographical areas where there was no business while others believed that this is part of a developmental function of state-owned banks. Dr. Patel opined that it is not the job of the RBI to force banks into certain regions, unbanked illustratively, and the banks go where the business is.

The other important issue that was discussed during this phase was priority sector lending (PSL). There has been a continuous debate whether PSL should be mandated by the RBI. The emphasis on PSL has continued despite differences of opinion within and outside of the RBI.

The discussion in Introduction on niche banks, including that of RRBs and LABs, is very interesting. Should each state have one RRB or should larger states have more than one, and for administrative reasons or for considerations of sectoral presence and specialisation? Privatisation of RRBs and the concept of private sector regional banks has also been discussed. In the case of LABs while Dr. Rangarajan supported the idea, Dr. Reddy opposed it on the ground that these do not have adequate size to diversify, might lack governance structure, and could be subject to capture. This Chapter also includes interesting discussion on self-help groups and MFIs. The
chapter closes with a discussion on the developmental role of the RBI. The interview with Dr. Rangarajan is very interesting as he spearheaded the financial inclusion drive in the country through the Financial Inclusion Report he
chaired in 2008. According to Rangarajan, financial inclusion has three dimensions - spatial (financial system must reach out evenly across the country); sectoral (credit need of every sector should be adequately met), and accessibility (vulnerable sections of the society should have access to financial services). Earlier, financial inclusion
was extended through branch network or priority sector lending. Now the focus is on reaching the vulnerable groups and providing them with not only credit facilities but savings and payment facilities too. The technological developments along with Aadhar would facilitate disbursal of loans to vulnerable sections of the society,
according to Rangarajan.

Governor Jalan, whose regime started in December 1997, had an interesting observation that during his tenure the focus was to take care of the country during the Asian crisis. Jalan also raised a very pertinent question as to “What is the use of opening bank accounts with no deposits?” This implies that the banking industry,
monetary policy and the people have to be ready for financial inclusion. According to Dr. Subbarao, RBI’s regulation is guided by financial stability and protection which play a prominent role in consideration of financial regulation. The thrust of the government in pushing direct benefit transfer makes the poor people actively want to
open a bank account. It is this principle that later on, after introducing PMJDY, the Government introduced social security measures, as well as providing benefits to MSMEs, conditional on having bank accounts. According to Jalan, the most important thing in banking is safety of deposits. Similarly, Dr. Patel emphasized that the RBI is primarily concerned with the safety and security of the customers and that digital financial inclusion should be number three in the priority, because if there is loss of data it is not only a business risk but also a reputational risk.

Dr. Y. V. Reddy provides the philosophical underpinnings to financial inclusion observing that, historically, basic thrust of public policy has been that money lending and informal credit is bad, and should be replaced with formal credit. Governor Reddy coined the term ‘Financial Inclusion” in 2005 and observed that the emphasis of banking should be specially oriented to the common person. The RBI agenda for financial inclusion was about financial services in general and not about credit alone. Reddy’s contribution in non-banking financial companies is extensively discussed in the Chapter. According to Reddy, finance can be disaggregated into three categories; financial transactions, credit, and other products, and that financial transactions, need to focus on integrity, safety, price and access.

It was during the regime of Dr. Raghuram Rajan that PMJDY was introduced. Rajan considers PMJDY as another push by the government to extend financial inclusion and that Aadhar can help in the initiative. Finally, Dr. Patel had a different view on financial inclusion and believes that technology and innovation will take over the agenda, and that RBI will take a back seat.