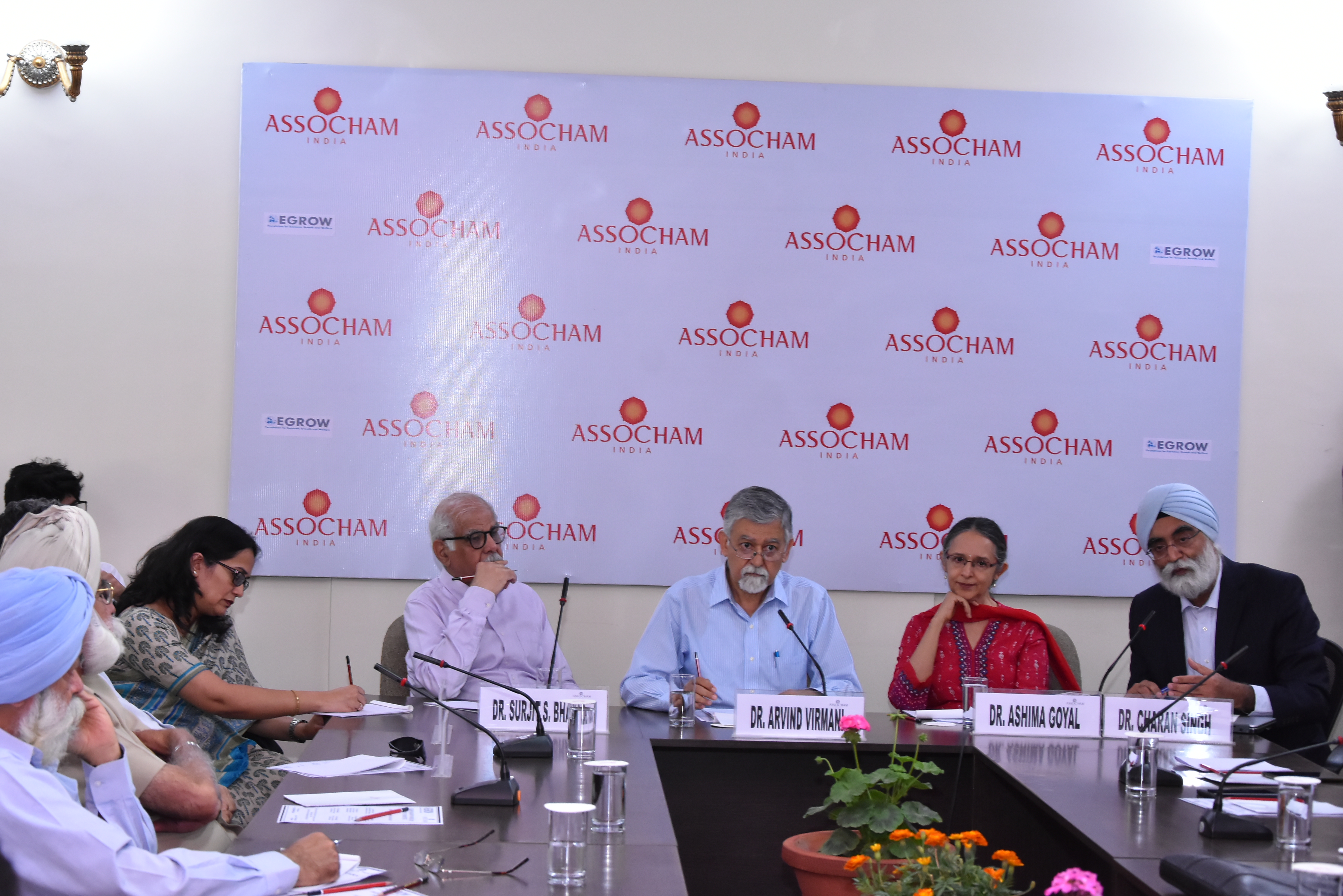 Proceedings of the EGROW Shadow MPC

In the run up to the monetary policy review to be conducted by the Reserve Bank of India on April 4, 2019, the EGROW Shadow Monetary Policy Committee met to discuss the probable interest rate revision that the RBI would take and other issues related to monetary policy. 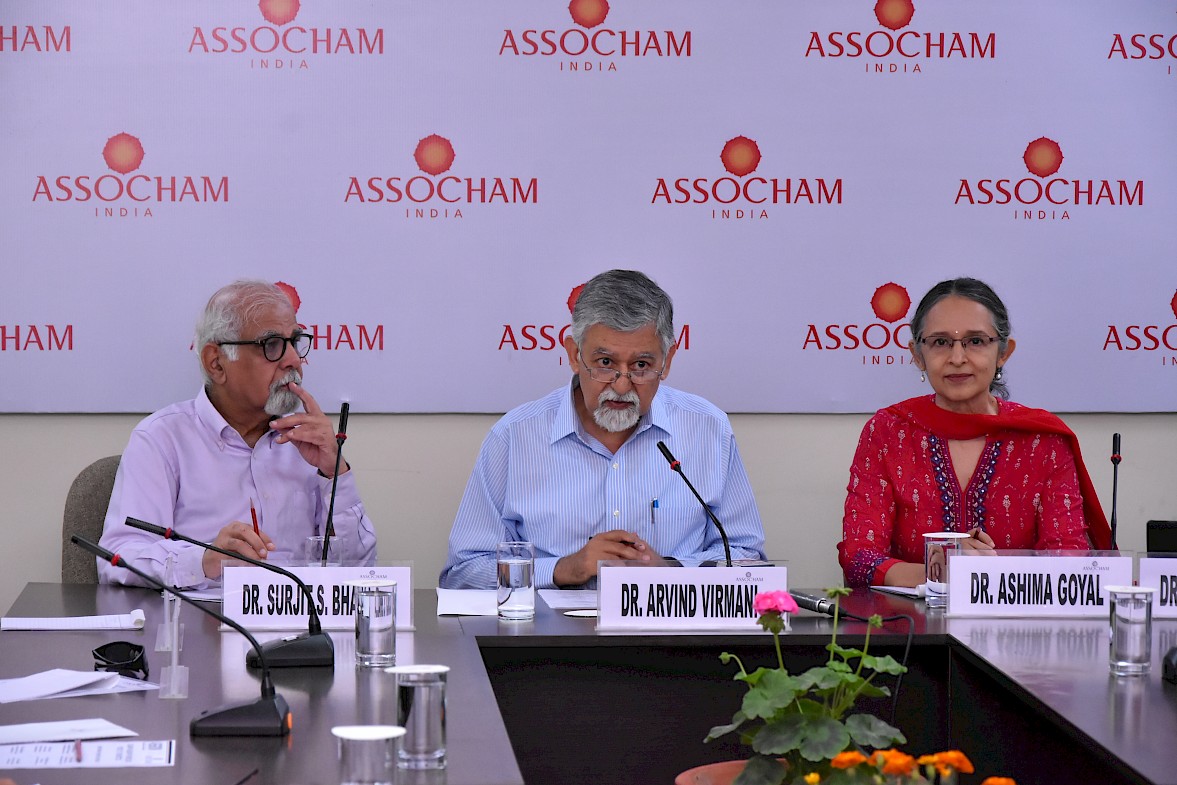 Dr. Virmani said that GDP data recorded positive growth but has recently decelerated. According to him, as per CMIE data, unemployment rate declined from 9 percent in Jan 2016 to 5 percent in June 2017 and rose thereafter to 7 percent. This is consistent with agro-rural recovery in 2016, after double drought of 2014-15 and 2015-16, little effect of demonetization (Nov 2016) on total (formal + informal) unemployment rate (UR) and negative effect on total UR of over complex GST, introduced in April 2017. He also noted that the reasons behind both the growth and employment stories were in part structural and in part idiosyncratic. He also spoke on global monetary policy and how the Fed U-turn in March had prepared markets for a rate cut in the coming year. Chinese data is creating new lows and how that might drive deflationary pressures in China. He spoke on oil prices and its impact on the Indian economy. He also spoke about global flows, apart from the Fed’s policy and the uncertainty around global trade due to politics, how the interest rate differential is likely to drive capital flows.

Prof. A. Goyal spoke about inflation targeting as an experiment. She emphasized need for such targets to be flexible. She noted that inflation and growth have both softened below MPC targets, and core inflation being higher than headline inflation, has a tendency to converge. She then spoke about how the primary goal of inflation targeting was anchoring expectations. RBI forecasts of inflation go a long way in affecting households’ targets of inflation. She spoke about how food inflation was hitting lows in India, while private investment was seen as collapsing. The demand for capital goods was weakening. She also commented on how raising output to meet the output gap to control inflation doesn’t work. She spoke about how inflation at this juncture is seen as less important than growth. She noted that current real rate of interest is around 3-3.5% while neutral real rates are seen at 1-1.5%, hence the differential is overheating the economy while driving huge inflows. She advocated a 50 bps cut, although raised questions on transmission of this cut. While financial markets had developed a fair bit, the long end of the yield curve may not move enough to impact corporate bonds, although the improved liquidity is always useful for banks. She also spoke about the need to move towards better balance between banks and NBFCs for lending. A few external risks such as a global growth slowdown, and trade war were noted. The importance of keeping domestic demand high was stressed. Further, she spoke about how crude oil had set a range between $60 - $70 and how this was benefitting India as an oil exporter. She spoke about misconceived notions of excessive government borrowing crowding out private borrowing, and how higher corporate savings drive growth going forward. She also stressed on the importance of identifying between temporary and permanent shocks to demand/ supply.

Indranil Sen Gupta shared his expectation of a 25 bps cut, while overall 50 bps cuts were expected in the coming year. He noted that inflation continued to remain benign, even though idiosyncratic factors drove the education and healthcare costs higher. Softening of commodity prices also helped to keep inflation low. He noted the risks of inflation rising to 5% (above the 3.9% estimate). He spoke about durable liquidity ensuring smooth transmission - especially in slack season and that liquidity transmission was lagged as indicated through most multipliers data. He moved to note how the Fed had turned dovish and how global expectations of a rate cut had set in. 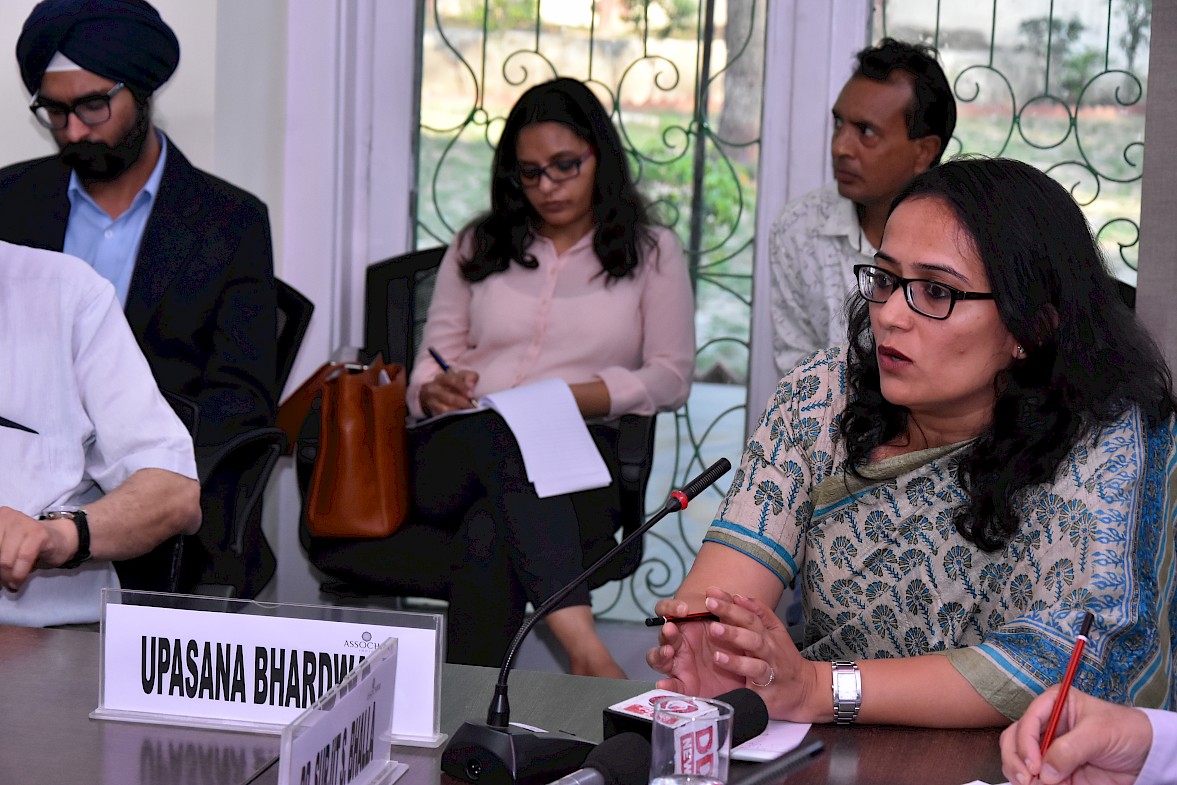 Ms. Upasna Bhardwaj spoke about the importance of liquidity. Raised an important question of whether the transmission would happen or not of the MPC’s actions. Noted that liquidity needs to go up for better transmission of the rate cuts. She spoke about the measures already being taken with this regard - the foremost of which being the enactment of the Liquidity Framework in April 2016. She stressed the need to actually bring this in place and implement it as originally deemed fit. While liquidity management had been stepped up recently with increased OMO, FX flows as well as the swap window opened by the RBI, the risk that public sector banks may not transmit a 25/50 bps cut is a real possibility. Credit deposit ratios are close to 100% in private sector banks, while public sector banks find it hard to lend. She noted that until banks can raise deposits at lower rates, the MCLR isn’t likely to fall. She further spoke about the importance of the MPC and the RBI working together on liquidity and policy stance. She spoke about how lower growth was materialising in the last 12 months, due to GST hitting export dominant sectors, the same weren’t likely to contribute to a pick up in the growth rate either. Investment had shown tendencies of picking up, with public spending coming of a record boost, while private capital expenditure was rising too, however, this changed and reversed recently. However, a bigger trouble was consumption growth falling - indicated through slowing auto sales, commercial vehicle sales, 2 wheeler sales etc. While at the same time, rural distress due to low food prices was hampering consumption growth as well. As a second order effect, consumption growth slowing down is likely to slow down investment growth further too. Further, if real rates continued to remain high, investment is again likely to suffer according to her. Inflation was seen as benign, however, the base effect is likely to kick in by year end. She noted again with great emphasis how just a rate cut was not enough, but there was a need to work on liquidity management. The short end of the yield curve would ease out, but the long end is likely to remain fixed due to large public sector borrowing and hence, the transmission is likely to be painful. A. Virmani noted the importance of old fashioned liquidity management. Posed the question of what a suitable metric for looking at liquidity was, commented on how this question has puzzled most central bankers around the world.

Dr. Surjit Bhalla commented on how central banks across the world have no clue what’s happening on the monetary policy and inflation. He spoke about how Jay Powell admitted the same last year, and how expectations around monetary policy changed in a matter of days following his latest comments. Monetary policy is not what it used to be. There has been a fundamental shift in inflation - American inflation has been falling since 1996 while oil prices have moved from $10 to $100 a barrel. Inflation and growth rates are not what they used to be. He spoke about how in October 2016, there was a rate cut, while the target real rate was already at 1.25%. He spoke of lack of clarity in the MPC and RBI’s operations. He commented on how inflation was not dangerous. But how real rates drove investment. Hence, industrial growth as well as GDP growth were all linked to the real rate. He commented on how project approvals had gone down significantly which also hit investment and drove growth lower. He noted that the investment to GDP ratio had gone down from 35% to 27% with the peak in 2007, however, in real terms it was down only 3%. He saw this as a clear function of the real rate moving in the opposite direction. He spoke about how in competing on cost of capital and the corporate tax rate, India fared poorly and it was a wonder the industry was still thriving. He advised a 50 bps rate cut.

Dr. Arvind Kumar spoke about how industry participants were demanding development finance institutional support. He spoke about the different sectors banks and NBFCs lent to. He continued on how the RBI had old norms in place with regard to priority sector lending. He spoke about a possible disconnect between the MPC’s recommendations and the RBI’s actions. He also advised a move lower in the SLR from 19.5% to 15%. 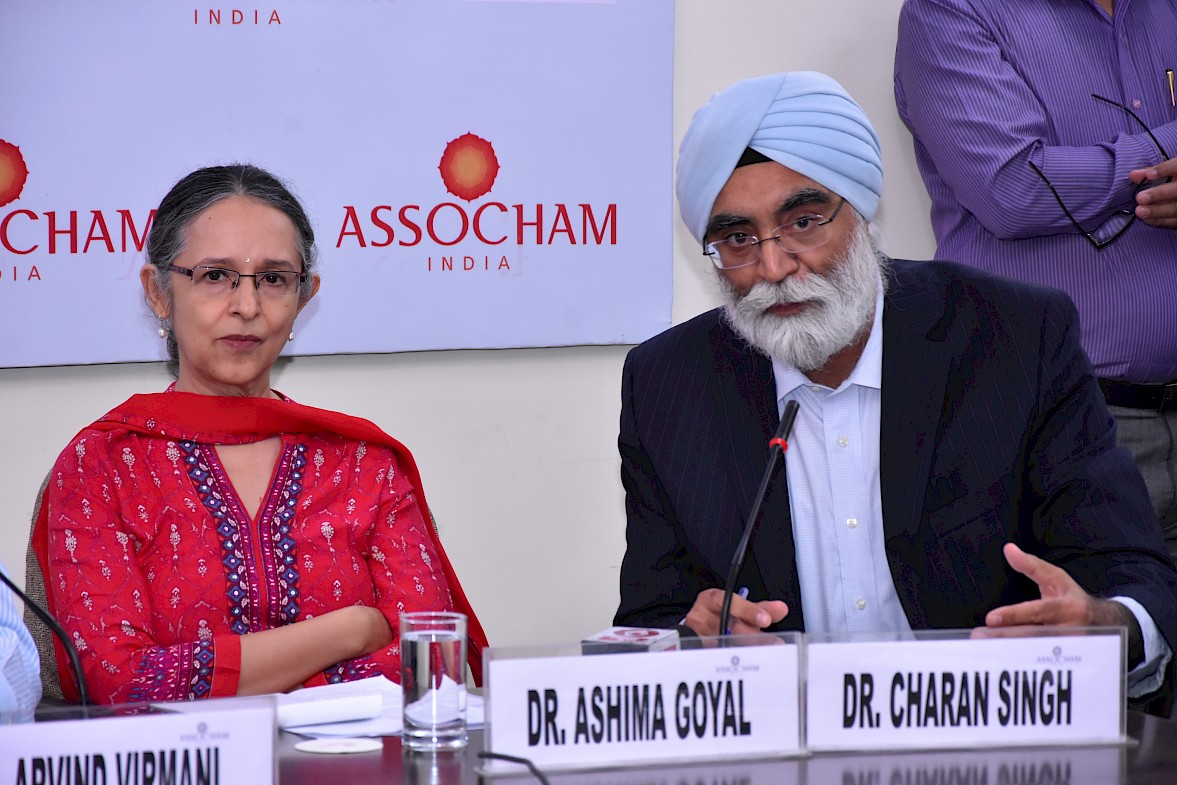 Dr. Charan Singh recommended a 50 bps cut. He spoke about the things which seemed most important - investment, growth and employment. Hence, the real rate becomes important. He spoke about how a roadmap for easing the monetary policy was necessary. He noted about how the US switched positions on monetary policy at the lowest unemployment rates in the last few decades. However, in India the unemployment rate continues to be a problem. This has a second order impact too, whereby the demographic dividend which we should have realized, if not appropriately used, can get wasted. The need to increase investment is important - that can be achieved by reducing the real rate. But it is important to see whether a rate cut actually drives investment higher or not and whether real rates have an impact. He noted that on the long end of the yield curve, significant public sector borrowing and crowding out are likely - especially due to this being an election year and fiscal profligacy is not uncommon at times such as these. Hence, if the long end remains fixed, the question of transmission becomes important. He spoke about how if the NPAs were disaggregated they were seen to belong largely to the infrastructural sector and hence advised that the RBI should consider a policy of disaggregating banks on this basis too – consider having development banks. He commented on how the transmission mechanism seemed broken and how commercial banks had to cut rates on deposits, due to which a time lag came into place. He spoke about how the target market for public sector banks were largely risk averse individuals, elderly, retired and pensioners. Hence, if rates came down, deposits may also come down as other avenues for investments such as mutual funds etc. were coming up. He then spoke about how the RBI should revisit the application of the Basel norms and question whether they should be present for all banks or only internationally active banks. Complying with these norms was a painful and costly exercise, however, if domestic banks were given leeway it may boost lending and investment. 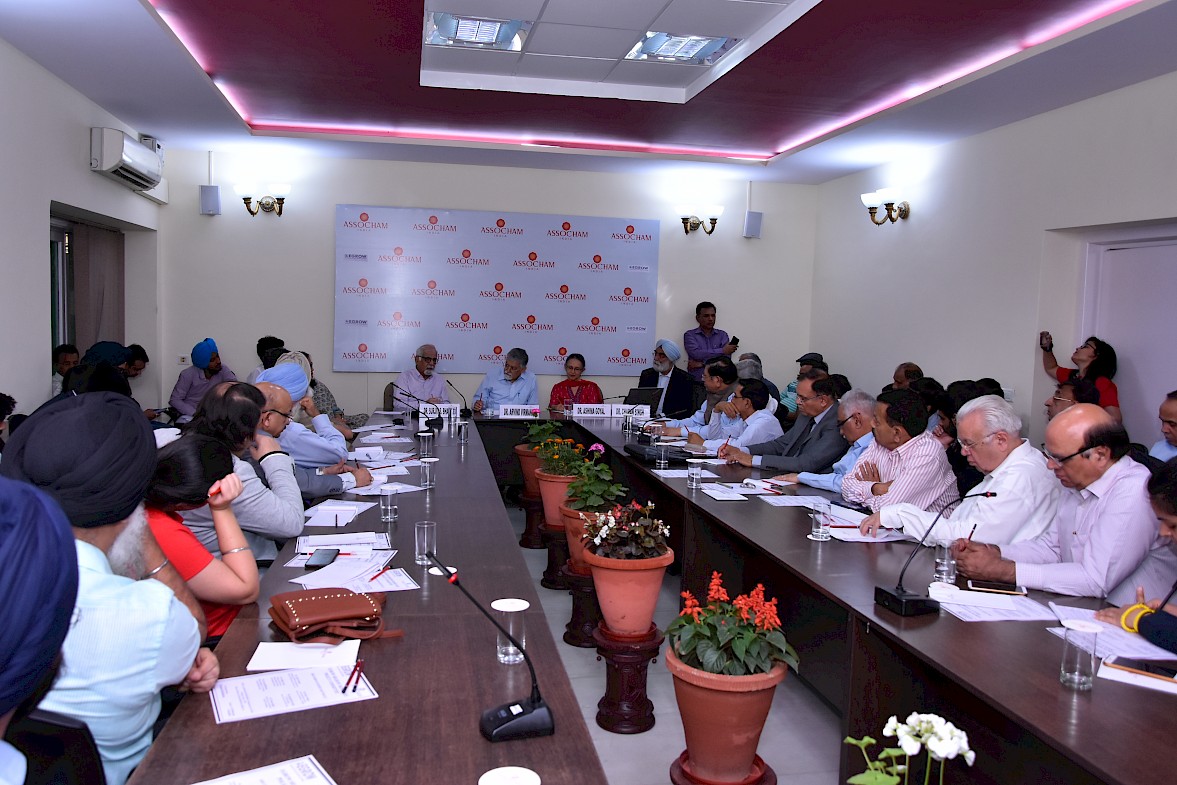 To summarize, EGROW Shadow MPC was of the view that the RBI should change the stance of policy from ‘Neutral to ‘Accommodative’ to address the problem of slowing economic growth. Panelists had multi-dimensional view of the parameters e.g. growth in output, income & employment besides liquidity, household savings & investment. After critical evaluation of the emerging scenario a 50 bps reduction in Repo Rate in forthcoming Monetary Policy by MPC was what the members agreed in the backdrop of global low economic growth cues, low domestic inflation & growth, high real interest rate and need for transmission of earlier and future interest rates to the ultimate borrowers by the lenders. Liquidity Management, sluggish Deposit Growth & acceleration in Credit Growth also came under the analysis 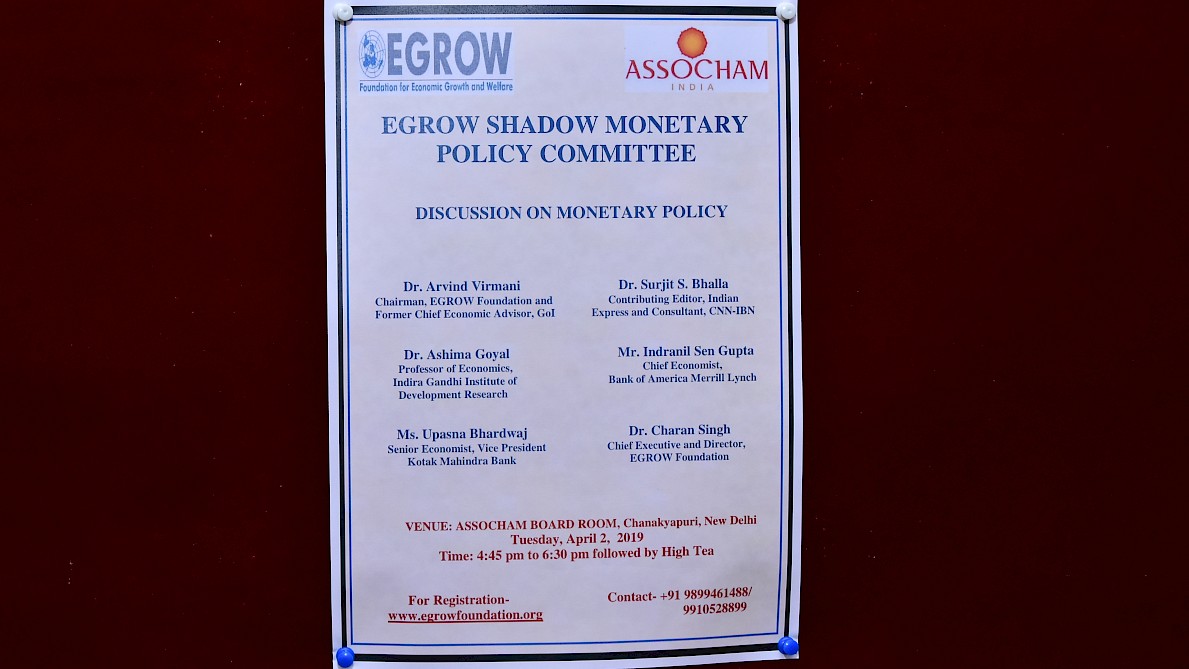 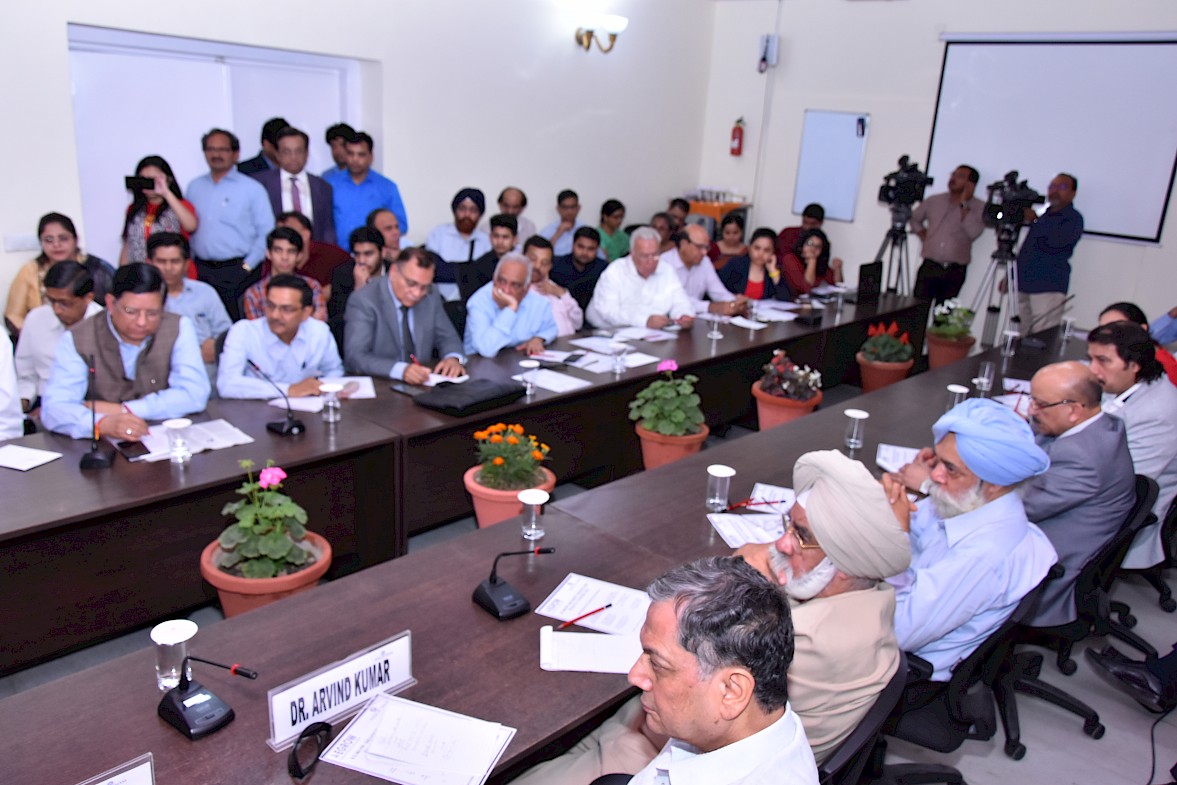