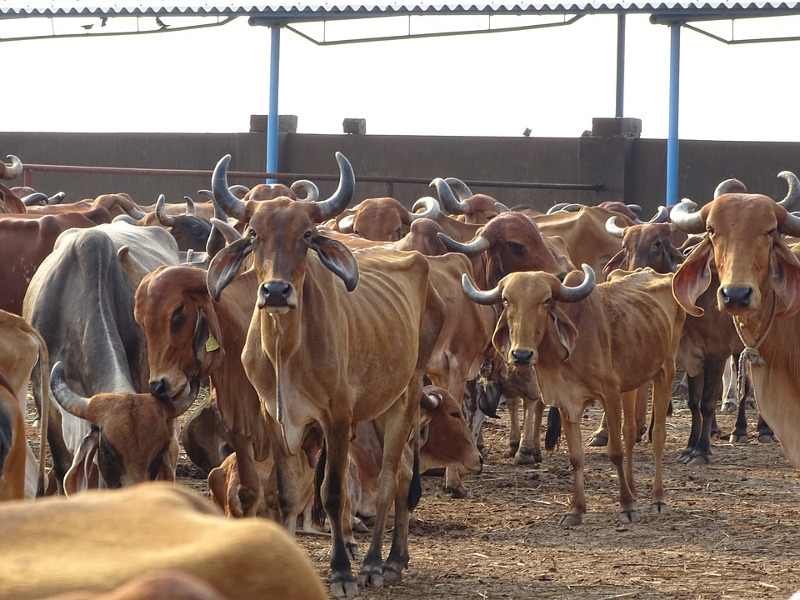 In India, according to Livestock Census of 2012, there were nearly 8.92 crore indigenous female cattle (cows) of which 1.8 crore were old and dry. This figure was nearly similar to earlier statistics of 2007, though the number of exotic and crossbred cows increased by nearly 30 percent over the period. There are only about 3,000 cow-sheds or Gaushalas, which are, apparently, grossly inadequate.

The indigenous cow (IC) is an important animal for Indian civilization, which has had a recorded history of nearly 5,000 years. The Temples of India, and as also the socio-cultural centers prominently display the statute of Nandi bull, the vehicle of Lord Shiva. In ancient times, cow played an important role in daily life. The low-fat milk of the cow was considered as useful substitute for mother’s milk. The cow’s milk was also used for preparing cooking oil, dairy products and desserts. Interestingly, cow was useful for other purposes too. Cow-dung, rich organic manure, was used for plastering the floor as well as manure in the fields, and fuel in terms of dung-cake. And cow urine was also considered to have medicinal values, as well as served as pesticides. The cows were also required for progeny and breeding. Then bulls who are draught animals were useful for ploughing the fields, and also transportation. Hence, there were scientific, cultural and economic factors that made the cow a precious and prized possession for society and individuals. In fact, in Kautilya’s Arthasastra, there are two chapters dedicated to cow. It was for these socio-economic benefits, that cow slaughter was prohibited through centuries, including the period when India was ruled by Mughals.

Times changed. The usefulness of cow was restricted to milk and after milching years, was rendered useless. The pattern and material for flooring changed even in rural areas, and chemical fertilizers emerged to replace cow-dung in fields, and LPG as fuel. Similarly, demand for cow urine declined over time, as well as dependence on cow’s milk for infants. New milk supplements for babies emerged with increasing prosperity, in India. Tractors increasingly replaced bulls for ploughing in fields, especially those of prosperous farmers, and in regions where green revolution was successfully implemented. Consequently, importance of cow, in accordance with economic importance, declined. The cows, during their dry phase and old age, were left unattended as they became a burden on the owners.

The select state Governments provide some financial support, generally meagre, for upkeep of the dry cows but in most cases, dairy owners have to fend for themselves and their cows. In some cases, but not completely, milk/dairy development federations/associations provide financial support through regular purchase of milk. In most cases, dry and old cows would be discreetly sold or dispensed with, to minimize financial burden.

In India, average life of IC is around 18 years. IC, in general, does not provide milk for first 3-4 years and last 3-4 years. These are the periods when cow-owners need support. The cow milk generally fetches lower price than buffalo milk which is richer in fat-content. The cow-feed is expensive and price of cow milk is generally just sufficient to break-even monthly expenditure of fodder, maintenance, labor, medicine and supplements during milching years, but not the discounted life cycle cost that includes non-milking years, especially old age. On average, cow milk costs about Rs.27 per litre and cow produces an average of about 4 kgs per day, keeping the complete lactation period while feed costs, during milching years, an average of about Rs.125 per day per cow. The value of labor, cow-shed and other maintenance is additional.

The income of the owner from milk is supplemented by birth of female calves, while bull calves have almost nil economic value and deliberately abandoned to wander away. Even the technique of artificial insemination does not ensure 100 percent surety of birth of a female cow and hence, in a life span, a cow may produce only about 4 to 6 female calves. The owner generally guards the female calves but not the aged cow who is also allowed to deliberately wander away. In Border States, according to reports, dry ICs wander away to neighboring countries. If sold, the old IC, depending on weight, can fetch about Rs.15,000, down from Rs.30,000 to Rs.45,000 a few years ago, while if retained, the feeding cost per day is Rs.60 and for 4 years of old age would amount to nearly Rs.88,000, excluding other costs of maintenance. The products from IC, unfortunately, like cow-dung and cow-urine, do not have a developed market and therefore not considered in financial arithmetic. An adult IC, depending on weight, would produce about 6-10 kg of cow-dung and 2 litres of urine per day. However, cow-dung is hardly sold for Rs.1 per kg, and urine for Rs.3-4 per litre but market for these products is yet to develop.

On macro-economy, IC provides employment and is source of income for supply chain of milk, fodder, and labor required for grazing and pasturing. In an emerging country like India where two-third of the population is still dependent on agriculture for livelihood, IC is still an integral part of the rural economy, especially for small and marginal farmers, though not recognized.

To reduce the financial burden on the farmer-owner of IC, and once again make cow a prized possession, Government could initiate certain measures. These could benefit the Gaushalas too, and encourage private sector to supplement the efforts by the Government in caring for IC.

Financial Products to direct savings towards IC: To enhance savings dedicated and directed to IC, Government could consider setting up an Indigenous cow-donation fund, through IC Care Coupons (I3C) in various denominations, exempted from income tax, proceeds of which will be used to finance/subsidize Gaushalas. A special IC-Recurring Deposits Scheme (ICRDS), for the farmer can be introduced where regular contributions can be made during the milching period, and then during the dry period, monthly amount can be dispersed until IC is alive.

Old Age Insurance/Pension to elderly IC: To make IC precious, Government could consider providing old age pension of Rs. 1000 per month, shared equally between states and Centre. The dry ICs are estimated to be around 1.8 crore, mainly in rural areas, and fiscal cost would only be Rs.21,600 crore for the total Government. The Government could also consider extending free medical facilities to dry ICs.

Developing market for Products of IC: There is need to build market for organic manure, vermicomposting, local brick-kilns, and rural bio-gas plants, especially for Gaushalas, for which cow-dung can be used. This will provide farmer with enhanced utility for IC, longer than the milching period. The cow-dung is cheaper than artificial chemically produced manures and also environment friendly. Similarly, need to develop market for cow-urine, a natural organic product, which can serve as an input in pesticides.

To conclude, there is need to recognize that economic factors are important for social and cultural issues like caring for indigenous cows.