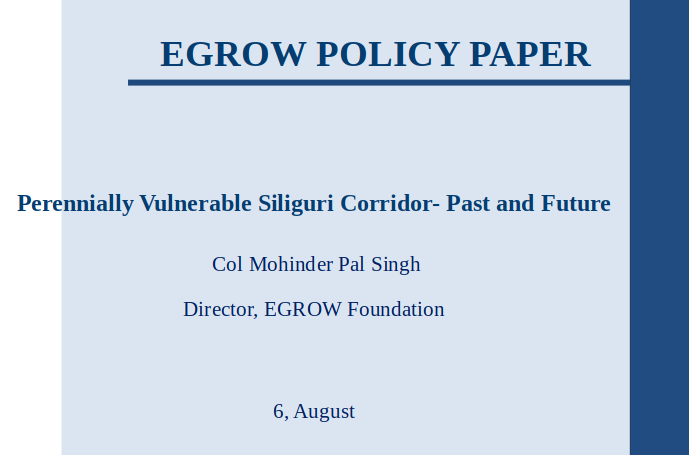 The perennially threatening Siliguri Corridor , a narrow passage to the eight north eastern states of India is a vexing question in the national security. Strategically , it is the Achilles heel in the defence of almost 2000 kilometres of land borders in the north eastern states with China and Myanmar. This piece of land is about 60 kilometres in length and meagre 22 kilometres wide at its narrowest point. With a plain terrain not interspersed with any natural or manmade obstacle this patch makes defensibility a real challenge. Its vulnerability is discussed in all kinds of military war games and national security discourses and detailed plans to deny any enemy intrusions are prepared. However , the issue of Siliguri corridor always come to fore with any Chinese move in Chumbi Valley or places like Dokalam which overlook this patch. Undoubtedly, this 2000sq km stretch of land will be the prime and early target of the enemy during any confrontation. Hence, the road corridor passing through it becomes a vital piece of ground for us which must be defended at all costs.

History of the Corridor

The present day Siliguri corridor shares its borders with three neighbouring countries- Nepal, Bhutan and Bangladesh. But during British India, the region that is now the Siliguri Corridor shared its boundaries with completely different sovereign nations/kingdoms- Nepal Bhutan, Sikkim and Tibet. During the British time the danger of China never loomed so large as Tibet was the buffer State and even after independence India had its presence in Tibet with ‘Post and Telegraph’ service handled through India. By accepting Tibet as a territory of China we not only invited the it to our doorstep but also trapped ourselves in this small alley leading to strategically important land lying east of Siliguri. This was a historical faux pas albeit never acknowledged. The implications of this were widely seen during the 1962. In 1971 we could have certainly corrected this mistake and taken steps to widen it to our advantage. However, it seems the strategic thinkers at that time and even later were more engrossed with solving the land dispute with China and completely completely missed out this aspect.

In 2003, India and China came to an agreement whereby China agreed to Sikkim’s addition to India and gave up all claims to the state and India recognised China’s sovereignty over Tibet. Whilst this significantly reduced the escalation in the India-Bhutan-China tri-junction region, China’s attempts to seize the de-facto control over the region continued. It all culminated in the Doklam Standoff between India and China in June-August 2017. After a mutually agreed disengagement, tensions reduced and peace returned. But a threat to the Siliguri corridor(also called as Chicken’s neck) is perennial as China has continued its overt road construction activities on its side of the border. This could allow China to rapidly mobilise and deploy troops thereby threatening to Siliguri Corridor. Furthermore, the deployment of artillery, missiles or anti-aircraft weaponry could easily jeopardise India’s efforts to resupply the region in the time of war, especially considering that there is only a single railway line through the region to the North East India.

The districts which encompass the Siliguri Corridor are – Darjeeling, Jalpaiguri, Kalimpong and Uttar Dinapuri. The Uttar Dinapuri district is where the corridor is narrowest with the width of mere 22km. This district is bordered by Nepal to its North and Bangladesh to its South. However, any military threat should one arise, will emerge first to the other three districts which border the disputed tri-junction area between India, Bhutan and China. The border along the Sikkim-China border and the West-Bengal Bhutan border is divided by sharp Himalayan mountain ranges. However, the Jampheri ridge is the point from where the mountains of the Himalayas begin to descend into the plains and foothills in Darjeeling and Jalpaiguri. The districts also have a large forest cover and many small rivers which eventually drain into the Ganga. The corridor is interspersed with many small roads but only one main corridor i.e. NH 27 passes through it.

Control of Mount Gipmochi (which is China’s claim point at India-China-Bhutan tri junction) would give the Chinese a strategic vantage right into the Siliguri Corridor. It is unlikely that the Royal Bhutanese Army stationed on the Jhampheri ridge would be able to offer much resistance. The distance between the claim points of Bhutan and China is nearly 5-6km apart. Such a distance could give the Chinese immense advantages in artillery fire on the narrow corridor. It is important to remember that currently as things stand, only a single railway line passes through the corridor and is the link between mainland India and its north eastern states. In general due to its narrow width, the corridor is always at risk of being subjected to conventional military strikes by the Chinese air-force and Special Forces operations to severe columns of logistic supply through the corridor.

The vulnerability is not only in terms of supply of military hardware and equipment during hostilities but also this area is the umbilical cord to over 45 million Indians living in the eight states. Any severance of this corridor would result in stranding of hundreds of trucks which are engaged in carryings essential goods. Over a period of time the North eastern states have developed tremendous tourist potential and all that is passing through this tenuous link.

The Siliguri corridor is an irascible and worrisome issue for India in all its dealings with China. Whether in a time of peace or during hostilities this will be an inescapable requirement in the minds of military planners and national security pundits strategically, given its insurmountable strategic relevance, India is likely to devote a large number of men and resources to defend this piece of real estate. This would entail a diversion of resources from the main battle front and could even possibly dilute India’s deterrent posture on the second front with Pakistan. Hence it is critical for India to think outside the box to find avenues to circumvent this vulnerability.

The first option for India is to enter into a treaty with Bangladesh permitting not only the transit of military equipment during times of conflict but also the civilian traffic and trade activities. This would add a layer of strategic depth in the region and alleviate (to some extent) concerns of the possible severance of the North East from the mainland. The treaty can cover multi-modal transport system which could include road and rail and a smooth movement of freight and personnel. The Bhutan-Bangladesh-India-Nepal economic corridor or BBIN was a similar attempt to allow free movement of goods and traffic within the region. However, this proposal got shot down in November 2016 when the Upper house of the Bhutanese Parliament repealed legislation that would facilitate the corridor. In the present scenario with the revival of BIMSTEC, India’s relations with Bangladesh have seen a fillip. India and Bangladesh have already mooted a proposal to facilitate transit between India’s landlocked north east and Prime Ministers of both countries have issued joint statements in this regard in 2010 and 2016. Currently also, there is a joint working group which is examining the possibility of connecting Mahendraganj in Meghalaya to Hilly Land Port in West Bengal through Goraghat, Palashbari and Gaibandha in Bangladesh. This distance of about 100km could easily be developed into an elevated road and rail corridor through Bangladesh. Such a corridor , if built in in PPP mode can result in regular tariff to Bangladesh and it can provide a shot in arm for trade and tourism of northeast. A successful model of Oil pipeline from sittwe (Myanmar) to Kunming(China) fetches the fledgling economy of Myanmar a transport tariff of $1 billion every year. On similar lines toll road and rail can be done with Government of Bangladesh which will result in a win-win situation for both the countries.

The second option for India to circumvent the challenges of connectivity is to make alternate transport arrangements which is safe and secure from the enemy eyes within the country itself. The development of a multi-modal transport corridor through Siliguri itself can be undertaken by India. A detailed ground survey can be undertaken to check the possibility of building an all-weather rail and road tunnels which is less likely to be susceptible to air and artillery attack in a time of a military conflict. Underground tunnelling through the vulnerable stretch, although costly, can give India a little more room to take harder militarily options , if required. Underground expressways and high speed rail connectivity through this corridors will also help to scale up the movement of civil and military traffic manifolds. This would also enhance trade and tourism of the NE region.

With some of these measures India can look to overcome the constraints imposed by geography and improve its position vis a vis China.